The reason I'm doing this is because I'm too lazy to make an entry for every sport anime I found interesting. By doing this entry, I can review 5 things in one post (yeay)

So, without further ado, let's proceed.

Episodes: 12
Genres: Sports
Aired: Jan 5, 2016 to Mar 22, 2016
Summary: The series is about an extreme form of sport known as "Stride." It involves 6 players on a team that runs relay races in towns. The story takes place at Honan Academy where first year high school students Takeru Fujiwara and Nana Sakurai try to recruit members for their "Stride" club. They request Riku Yagami to join with the help of Takeru and Nana. Their goal is to compete and win the "End of Summer," a top competition hosted in Japan alongside other schools.

Review: I put this anime on number 5 is because whenever they're competing with other schools, I can't feel the excitement to win. None. The writer of this anime didn't show that they're very competitive and want to be better than others. All they show is that, they want to win. And they did win. They make it looks easy while in real life, it's not. To me, the competitive part is what makes a sport anime awesome. So yeah, I'd rate 6/10 for this anime. 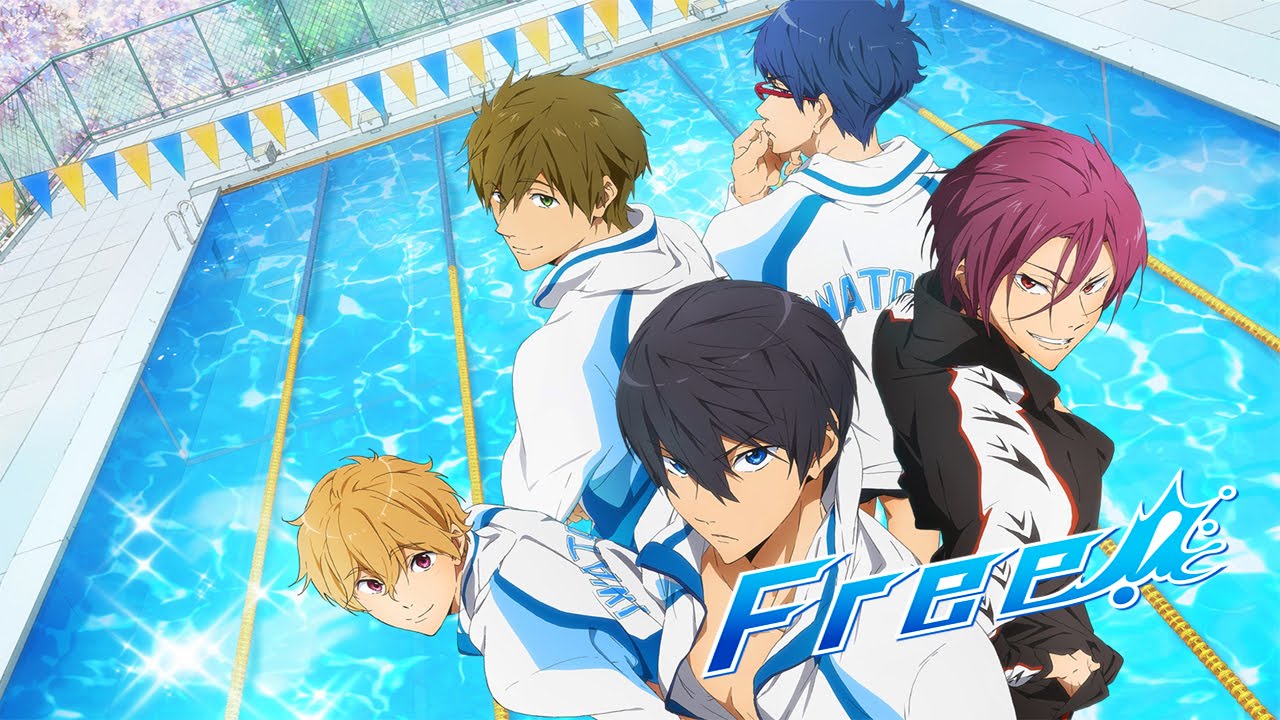 Episodes: 12
Genres: Comedy, School, Slice of Life, Sports
Aired: Jul 4, 2013 to Sep 26, 2013
Summary: The story revolves around Haruka Nanase and Rin Matsuoka. They were childhood friends, but Rin appears to be more competitive and he went to his separate ways. Time passed, and they appeared to compete each other again in a real competition with they respective teams.

Review: I'd rate 7/10. this work is pure fanservice! I don't even know swimming club members need to have muscles like that omg. But that rating did not biased by fanservice this anime was giving, alright. I like it because the competition that bring a team together, also dragging the team down. The competition that break up a friendship, also recover that friendship too. It's a great watch if you're boring and want some entertainment.

Episodes: 178
Genres: Action, Comedy, School, Shounen, Sports
Aired: Oct 10, 2001 to Mar 23, 2005
Summary: The world of tennis is harsh and highly competitive. Seishin Gakuen Junior High School, more commonly known as Seigaku, is one of the most prominent contestants in this battle of the finest. Their team line-up gets even stronger with the sudden arrival of a young prodigy from the West, Ryouma Echizen, who is determined to prove himself and escape the towering shadow of his legendary father. This fine addition changes the team forever.

Review: THIS ANIME IS A LEGENDARY!! I've watched this anime when I was in primary school and stopped watching mid-episodes. When I was on secondary school, my childhood friends owns the full box set of this anime, so I just gotta snatch them up and watch it again. The feeling when I watch it again is indescribable. It's like watching my childhood all over again, and believe me when I say it's worth watching 178 episodes because it's truly the best! I'd rate it totally 12/10 (lol) 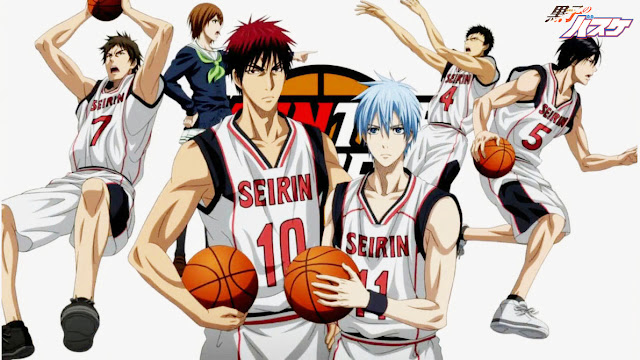 Episodes: 25
Genres: Comedy, School, Shounen, Sports
Aired: Apr 8, 2012 to Sep 22, 2012
Summary: This anime follows the journey of Seirin's players as they attempt to become the best Japanese high school team by winning the Interhigh Championship. To reach their goal, they have to cross pathways with several powerful teams, some of which have one of the five players with godlike abilities - known as "The Generation of Miracles" -, whom Kuroko and Taiga make a pact to defeat.

Review: Although this anime is kind of new to me, I can't help but fall in love with their enthusiasm to win the Interhigh Championship. It's actually impress me when Kuroko use his lack of presence to move around unnoticed - I mean how is that even possible!? How can you not see someone you're playing against? This is actually mind blowing, so you should watch it yourself how he did that trick, alright. I'd totally rate this anime 11/10  ಥ⌣ಥ 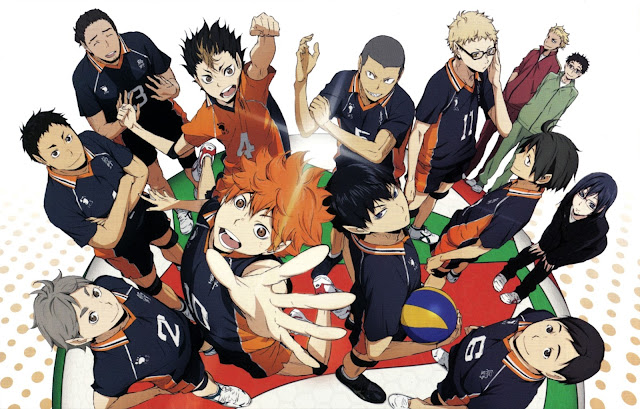 Episodes: 25
Genres: Comedy, Drama, School, Shounen, Sports
Aired: Apr 6, 2014 to Sep 21, 2014
Summary: Inspired after watching a volleyball ace nicknamed "Little Giant" in action, small-statured Shouyou Hinata revives the volleyball club at his middle school. The newly-formed team even makes it to a tournament; however, their first match turns out to be their last when they are brutally squashed by the "King of the Court," Tobio Kageyama. Hinata vows to surpass Kageyama, and so after graduating from middle school, he joins Karasuno High School's volleyball team—only to find that his sworn rival, Kageyama, is now his teammate.

Review: This may be the only anime I actually posted entries individually, because believe me it is THAT awesome! You can read it here (first season) and here (second season) You all may guess how many over 10 I'll rate this anime, right? Yes you got it right, I'd rate it 15/10 if I have to (lol)

So, that's it guys. Draft ni dah lama ada, tapi aku je yang pemalas nak mampos nak taip sampai habis ಠ_ಠ If you're interest in watching sports anime, make sure to NOT miss any of these anime I just recommended to you. I wish you all the best with the excitement and have fun while watching sport anime, because it's going to be 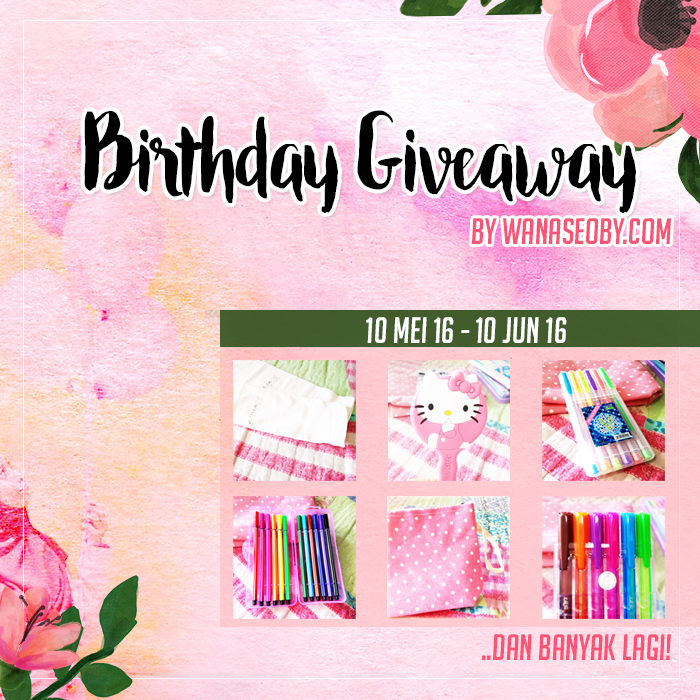 
An ailuromania, an introvert, one who appreciates good writing and photography. Also someone who is eager to learn those thing that have nothing to do with her studies. A self-proclaimed person of excellent yet diverse taste. A sucker for art, books, anime and anything that is aesthetically pleasing. Currently taking Bachelor Degree in Material Engineering - and struggling to be a decent human being. The smell of old book is my guilty pleasure.

Wanna know me better? Read this and this.


About the blog;
DOB; October 2011
Language; (broken) English and sometimes Malay
Previous url; http://hibaeri.blogspot.com
This blog contain my personal life, random thoughts, review, etc. I'm using English as my main language (sometimes mix with Malay) in this blog as a practice to write better in English - and I hope it's working out. Nice to meet you!
Stock photos are from various photographers in pexel.

| twitter | instagram |
Leo, 24 | Istp & Ravenclaw. This blog contain my personal life, random thoughts, review, etc. Posts are either in English or Malay. Best to be viewed with Google Chrome.

For any inquiries or collaboration
{ nlizma24@gmail.com }